The COVID-19 pandemic has accelerated a lot of trends, including the trend of people quitting their jobs.

The Bureau of Labor Statistics reports that nearly four million Americans quit their jobs in July—for the fourth month in a row. In the same month, job openings rose to a record high. According to a Microsoft survey released in June, 41% of US workers were considering resigning. Pundits are calling it “The Great Resignation.” 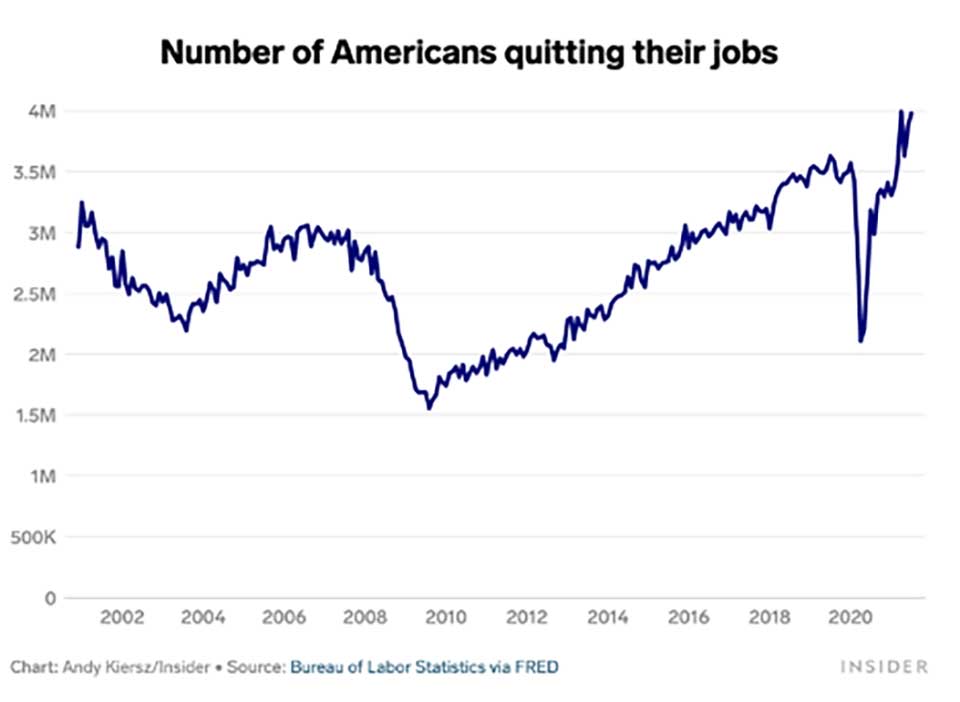 This should be a very loud wake-up call for business leaders. The biggest cost to any organization is trying to replace experienced people. Now more than ever, it’s harder to recruit and retain good people.

It’s a seller’s market, and employees’ values have changed during the pandemic. Per research released by Gartner in September, “Employees no longer want the traditional employment value proposition, instead, they want a more human deal with their employers where they are recognized as people, not just workers.”

The most important step a leader can take to meet employees where their values are is to establish a culture of trust and empowerment. I only have to look at my own career to see how much this impacts employee and company performance.

I’ve worked in organizations where there was trust and empowerment. I wanted to come to work every day, to work hard and do my best. I felt valued and empowered to solve problems and bring new ideas to the table.

I’ve worked in environments where trust and empowerment were lacking. I wasn’t excited to get into work. I dreaded each meeting, each conversation, and eventually, the entire day. I kept my head down, and my mouth shut, and ultimately, I left.

A tale of two companies

It’s great to have personally experienced that culture, but how do trust and empowerment, or the lack thereof, impact an entire company?

Here’s the best illustration I can give you: I worked at two companies that were both at $8 million in revenue when I started. In one company, we cultivated an environment of trust and empowerment, a “growth culture”, and we grew to $65 million in a few years’ time. In the second company, there wasn’t a lot of trust and empowerment, and when I left after a few years, the company had hardly grown at all.

There are always business rationalizations and market justifications for why a company grows or doesn’t. In my experience, what it comes down to is having a group of people who care about one another and the customers they serve, who trust each other, and can pull together during difficult times. That cohesive energy stems from how they feel about the company itself, and those around them. Companies grow when people grow. People grow when they feel valued. Trust and empowerment are the foundation for growth and innovation, and for building a company people want to work for.

How do you create a foundation rooted in trust and empowerment? Here’s what that looks like based on my experience:

It all adds up to what’s referred to as a “growth mindset”.

When I’ve worked in companies with a growth mindset, it seemed to me that people felt like what they did matter. Job descriptions were broad and tied to outcomes, not tasks. If they saw something broken or raised an issue, leadership listened and wanted to know how the situation could be improved. They were interested in evolving as a company, and people grew and evolved too.

In one such company, I came in as an entry-level analyst. Before I knew it, I was influencing product and corporate strategy, how sales teams were structured and where we made investments in the company. I soon stepped into a leadership role.

The contrast to that is a “fixed mindset” culture. Here’s what I’ve experienced in that type of environment:

In this culture, people’s roles and spheres of influence tend to be narrow. They don’t point out problems they see if they’re outside of their sphere. They don’t bring forward new ideas, because they know they’ll be told to stay in their lane. There’s a ‘not my job’ mentality.

You can probably guess which type of culture leads to more innovation.

Not just for small companies

This is not just a big company vs. small company issue. One of the most empowering places I’ve ever worked is one of the biggest companies in the world. One of the worst was a small company where the leader would scream and yell and talk about people behind their backs. No one felt safe.

Big companies that want to continue to innovate intentionally invest in things like incubation centers or hack-a-thons, not necessarily because they’re demanding specific profitability performance but because they’re trying to foster the creation of new ideas, and they don’t hold an expectation of performance. They hold an expectation of evolution, growth and collaboration.

In a small company, innovation is even easier. If you set the right tone, innovation is what everybody does naturally. There’s so much flexibility in the direction of a smaller company and there’s a greater ability to say, “Hey, why don’t we try this?” and go for it.

What all of this comes down to is how you value your employees. Money alone is not the answer. Money typically isn’t even the primary factor in how employees feel about the place they work. Feeling empowered to contribute to the best of their ability, and having their contributions valued, matter more than paycheck or title to many employees.

The value you place on your employees as people is communicated every day, from the top down. It’s communicated by listening to opinions and ideas, trusting people to make decisions, and clearing the runway for them to thrive. It’s shown in removing the obstacles to let people go beyond what they’re doing today, and then giving them the opportunity to push themselves further and try new things.

The COVID-19 pandemic has been a time for people to re-evaluate their relationships and how they spend their time, both personally and professionally. Many have decided that returning to business as usual, or continuing to work in a job where they don’t feel valued as a person, is not worth the costs to their physical and mental wellbeing.

That’s what The Great Resignation is all about. If employers don’t acknowledge and respond to this shift in workers’ mindsets, it will ultimately lead to losing lots of good people.

Josh Cyphers is the President of Nvoicepay, a FLEETCOR Company.  For the past 20 years, Josh has managed successful growth for a variety of companies, from start-ups to Fortune 100 companies.  Prior to Nvoicepay, Josh held leadership roles at Microsoft, Nike, Fiserv, and several growth-stage technology companies.  Josh is a lapsed CPA and has a BS in Economics from Eastern Oregon University.

Gaming: Levelling Up Your Brand In The Cookie-Less Future

Is Disney’s Developing Tech Stack a Canary in the Google Coalmine?

How Brands Can Transform Their Measurement Framework to Drive Organizational Change