The average consumer sees over 4,000 ads per day across various channels, according to dentsu Aegis Network. In the 1970’s, the number was approximately 500 ads per day, which almost sounds inconsequential to today’s standards. The rise of digital advertising has not only led to an overinflation of served ads, but also created the race for the most coveted metric of all: Attention.

Marketers know where their consumers are spending time between linear TV and OTT, social media, OOH events, and of course, gaming, but just because time is spent somewhere does not mean each of these channels is given undivided attention. Case in point: We all know people who scroll through their phones at concerts, fold laundry while “watching” TV, or leave the room altogether during commercials… but do we know anyone who multitasks while playing a video game?

Advertisers need to consider attention as a critical indicator of where to spend ad dollars, but how can this metric be measured? Understanding the research and data could provide valuable insights into the future of an evolving advertising landscape.

Frameplay’s Intrinsic Time-in-View metric measures the length of time an ad impression is viewable during game play. An impression is only considered viewable if it meets Frameplay’s intrinsic in-game advertising proprietary and market-leading viewability requirements. This is a complex pixel analysis within the game that accesses data such as ad ratio, skew, and obstruction from the visual perspective of the game player. When the ad is considered viewable, the time clock starts and pauses or ends once the ad is considered no longer viewable. In addition to evaluating Intrinsic Time-in-View in the context of how long the ad is in view during game play, Frameplay also analyzes the total amount of time the ads are in view during the entirety of the campaign and the average amount of time each ad and campaign is in view per player session.

“Our proprietary intrinsic in-game viewability technology has been at the forefront of our product offering since our company’s inception,” said Jonathon Troughton, CEO of Frameplay. “We are proud to share that we have further validated the efficacy of our advertising solution, with results from our two eye tracking studies showing a strong correlation between our intrinsic in-game viewability algorithm and intrinsic time in view as substantial indicators of attention.”

Frameplay, joining forces with dentsu, executed research with Lumen where participants were exposed to a game play session.

“The results from these studies validate proven attention in Frameplay’s gaming inventory, and we will use this data in planning as we evaluate future intrinsic in-game opportunities,” said Joanne Leong, Vice President, Director, Global Media Partnerships at dentsu.

Further, Frameplay partnered with both Lumen and independently, eye square, to analyze and compare Frameplay’s Intrinsic Time-in-View calculation with their respective eye tracking measurement. Both companies, using unique and differing methodologies and technologies, validated with confidence that Frameplay’s Intrinsic Time-in-View measurement is a viable measure of attention. 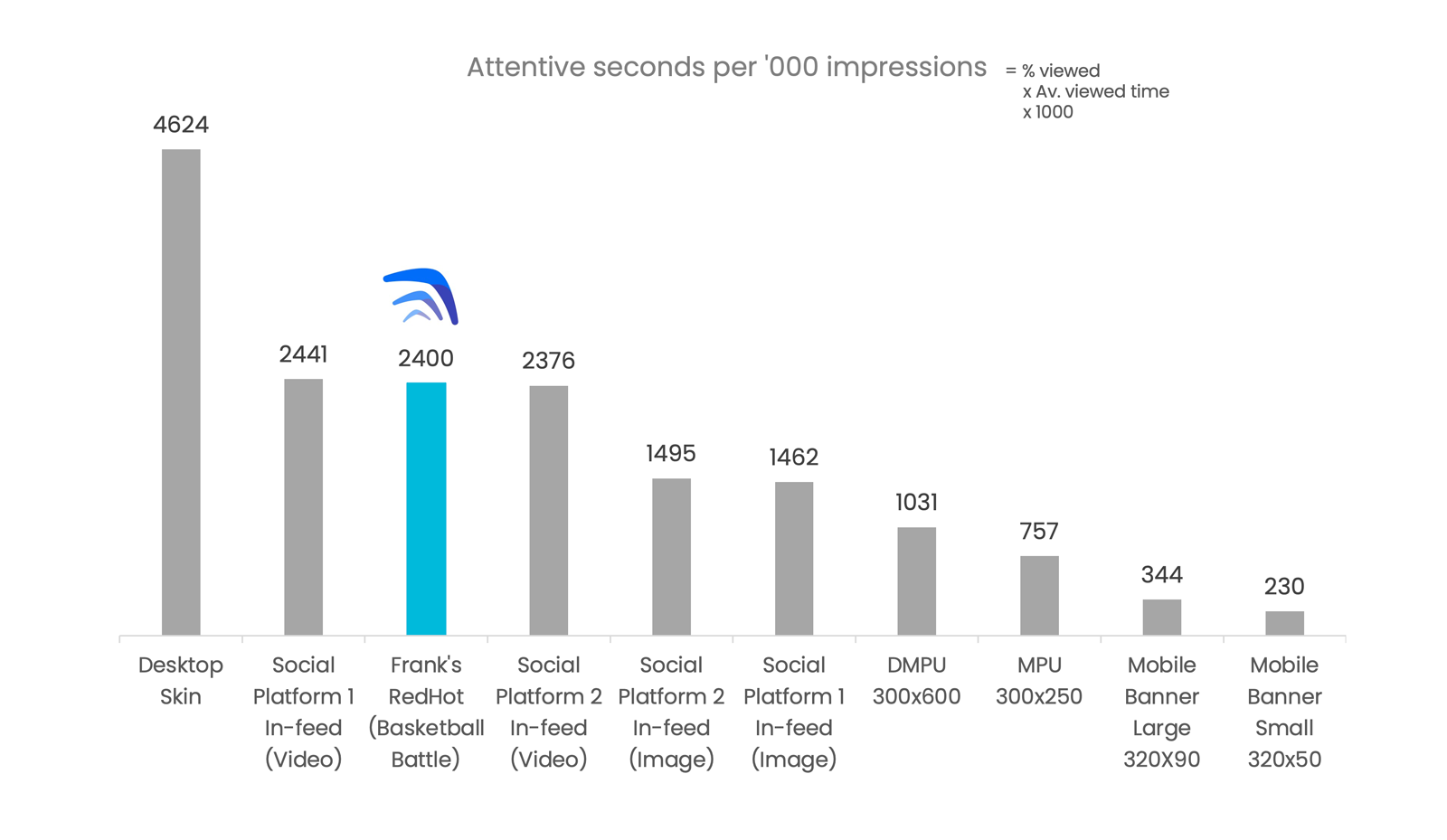 “Lumen conducted an eye tracking test to assess how much attention goes to Frameplay’s in-game ad formats, and how this compares to standard digital ad formats. The research shows the power of in-game advertising that works to support the user’s experience rather than interrupting their game play,” said Mike Follett, Managing Director at Lumen.

Getting Your Brand in the Game: Planning and Execution

Instead of people simply watching stories through video methods, video games allow people to play the stories, making the experience interactive and captivating. Brands looking to capture the attention of their consumers are actively pursuing intrinsic in-game advertising opportunities.

By optimizing creatives for the gaming environment, advertisers can anticipate reaching their audience within highly cinematic interactive video games at the moments when gamers are paying the most attention. Intrinsic Time-in-View offers brands the opportunity to not only ensure their ads are viewable, but that they have enough time to resonate for consumers to make purchasing decisions.

For more information on getting your brand into the game, contact Scott Linzer, SVP, Business Development at s.linzer@frameplay.gg

The Golden Rule of Marketing in Gaming: Listen to the Fans

The Stars Align At Cannes, Establishing Gaming As The Advertising Medium We Have All Been Waiting For