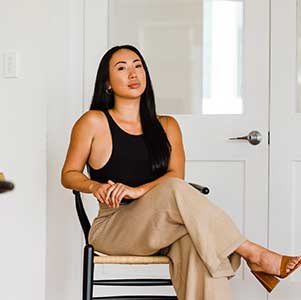 Iyia Liu is a self-made Kiwi businesswoman, who from her early 20s developed a knack of starting, scaling and selling businesses for a tidy profit. At an age when many are wrapping up their university studies, Liu was already riding high as a successful entrepreneur.

According to Liu, her entrepreneurial spirit was inspired by NastyGal founder Sophia Amoruso, who created an online clothes retailer worth $100 million in just a few years.

“She was so motivated, I wanted to be just like her. So, I saved what money I could, and as soon as I graduated I put those funds towards my first business, which actually failed. But it led to the creation of four other e-commerce businesses that I have started from scratch, built up and then sold for a profit,” she says.

You could say that Liu has a talent for founding and growing businesses, yet for her, each one has been its own lesson in trial and error.

“Often you won’t really know what works and doesn’t work until you try it. You’ll figure out things you can improve based on consumer feedback, as well as other inefficiencies over time. When you have your own businesses you need to be involved in every aspect, so you learn as much as you can on the go,” she explains.

From A to Zs

Liu’s businesses often skew towards targeting Gen Zs and Millennials. When it comes to communicating with these audiences, she notes it’s important to think about where your audience is, and how they act.

“TikTok may target younger audiences, versus Facebook, which has an older demographic. You need to work out what types of content they respond to. Short or long-form videos? Static Image? Reviews? A/B testing is a great way to figure out what works, and then you can scale with the proven successful techniques,” she says.

Liu acknowledges that Gen Z is heavily influenced by technology platforms and encourages other entrepreneurs to invest strongly in digital marketing.

“Gen Z has shorter attention spans, so getting your message across quickly in the first few seconds is important. They are also very trend-focused, so you may want to come up with new products, packaging and marketing within those new trends in order to attract them,” she adds.

Taking the Ws and Ls

Despite her handle on the market and her dedication to building brands that inspire and delight younger crowds, Liu says building a Gen Z empire isn’t easy.

“You’re going to have highs and lows. And curveballs will be thrown at you all the time. I used to get really worried and stressed whenever something wasn’t running smoothly, like if a shipment was delayed for a month and hundreds of customers were emailing asking when they were going to get their order,” she says.

But for Liu, a key lesson has been learning to manage stress and challenges.

“Over time I’ve come to see that some things are out of my control and that I have to deal with challenges efficiently through problem-solving and then moving on. Stressing over something that has already happened doesn’t help anyone,” she explains.

And even with multiple businesses under her belt and a growing mentorship empire, Liu has no plans of taking a step back as the Gen Z whisperer.

“We’re still expanding and we don’t plan on stopping. We are building up our product lines, and expanding into retailers in addition to growing our omnichannel approach,” Liu says with purpose.

In the near future, she hopes to make her brand’s household names and go-to businesses for younger consumers looking to form a meaningful connection. Then, and only then, will she consider taking a break.

The Sonic Truth: Does Your Brand Sound Like It Cares? - With Wonder Media

2 Become 1: The Art of the Perfect Merger