Emotions are what make us human, bring people together and even impact our choices in life, from who our friends are and our career path, to the products and services we buy.

For brands, emotions present an important opportunity to engage the audience, and creating an emotional connection is vital to attracting both customers and employees. In fact, when a company gets emotion right, it will thrive. Take the John Lewis Christmas advert. The yearly tear-jerker typically supercharges sales — although for some the formula is becoming tired — and has spawned imitators both good and bad.

But John Lewis didn’t invent the emotional ad campaign. All brands, including B2B, should look to stir up some emotion in their audience to engage them. David Alexander, Creative Director & Head of Studio and Rose Stewart, Design Director at The Frameworks, discuss why getting on your audience’s wavelength is so important when designing successful creative, and reflect on how hitting on the right, authentic emotions can engage people — and even inspire loyalty.

We All Want to Find Our Tribe

Strong campaigns target the most relevant audiences — and for brands, that demands connection.

David Alexander: What do we mean when we talk about emotion and emotive campaigns? I always think about Yuval Noah Harari’s book Sapiens, which talks about tribalism. As humans there’s a desire to be part of a tribe, to tap into something, to feel like you fit in. We’re always looking for a product or brand that speaks our language.

Take Apple and its Think Different campaign from 1997. It was moving away from the speeds and feeds approach of other technology companies and instead looking to resonate with a certain group of creators who want to change the world. That shift is a great example of communication at its strongest.

Rose Stewart: I feel that today campaigns have to be much more personalised and speak to the individual. If it’s not on my wavelength and the type of person I am emotionally, I may not engage with it on as deep a level.

In the past, you could have something very broad that spoke to a group, but now people are so time-short and everything is on social media and subject to algorithms, so a brand needs something that is both quick and resonates so well that it reaches its intended audience and engages them.

DA: But once you have a product or a piece of communications that really grabs you — it’s hard to shake it off. You have an affinity for it and will go to lengths you wouldn’t normally consider to back it, like queueing up outside a store for the latest product launch or defending a brand from trolls. In recent weeks we’ve even seen passionate campaigns for huge brands to pull out of the Russian market in response to the invasion of Ukraine. And most did, such was the scale of consumer power.

RS: Tapping into emotions creates differentiation, even if two products are the same. It’s not enough to be a shoe any more. It needs to be a shoe brand that answers questions. How will it make me feel? What will it help me achieve? How will it improve my life?

It’s expected that brands fit with their customers’ ways of thinking, too. You’re looking for the brand’s moral compass now. And that’s about emotions. It’s not just “you’re the right product for me and my age and gender”, it’s about shared beliefs.

DA: And shared stories. We worked on a branding project for a nonprofit initiative where we had to come up with the name. We decided on Allied Against Cancer. It represents an imperative rallying cry in its own right. But we also designed it so you could pair it with a name or another brand — “Rose is Allied Against Cancer” — and that makes people feel part of something, united in a cause.

A Story Must Be Authentic

RS: Storytelling is why I got into design. From the moment we read the opening line of a brief to when we give the final deliverable piece to a brand, we always need to have that end user and the story we’re telling them in mind.

For me, one of the biggest parts of any project is empathy. Understanding and sharing a feeling is how you engage someone. Without that empathetic, emotive element — and a genuine one at that — it’s quite hard for you to create compelling storytelling.

DA: I think that the problem with a lot of over-emotional campaigns is that when it isn’t authentic it falls flat. People see what you’re trying to do, and see through it.

RS: Yes, emotion isn’t always about laughing or crying. There is a wide breadth and spectrum of emotion, and some projects seem easier because it’s a naturally emotive topic, but you still have to put it out in the right way to make it engaging.

And even if it’s not explicitly emotional, there is always a feeling to be tapped into. Our work on the IBM Garage project doesn’t seem like an emotive project. It’s B2B and technical, but it’s still an emotive piece. We weren’t trying to make someone cry, but we created a 360° VR experience that helped someone feel what it was like to enter the IBM Garage and evoked the sensation of that experience.

DA: Authenticity comes down to “how do you best talk to your audience?” You’re communicating to people, not bricks and mortar. That’s why at The Frameworks we always do research and dive into personas. That’s really important as it allows us to hone our message and make it super relevant and authentic. 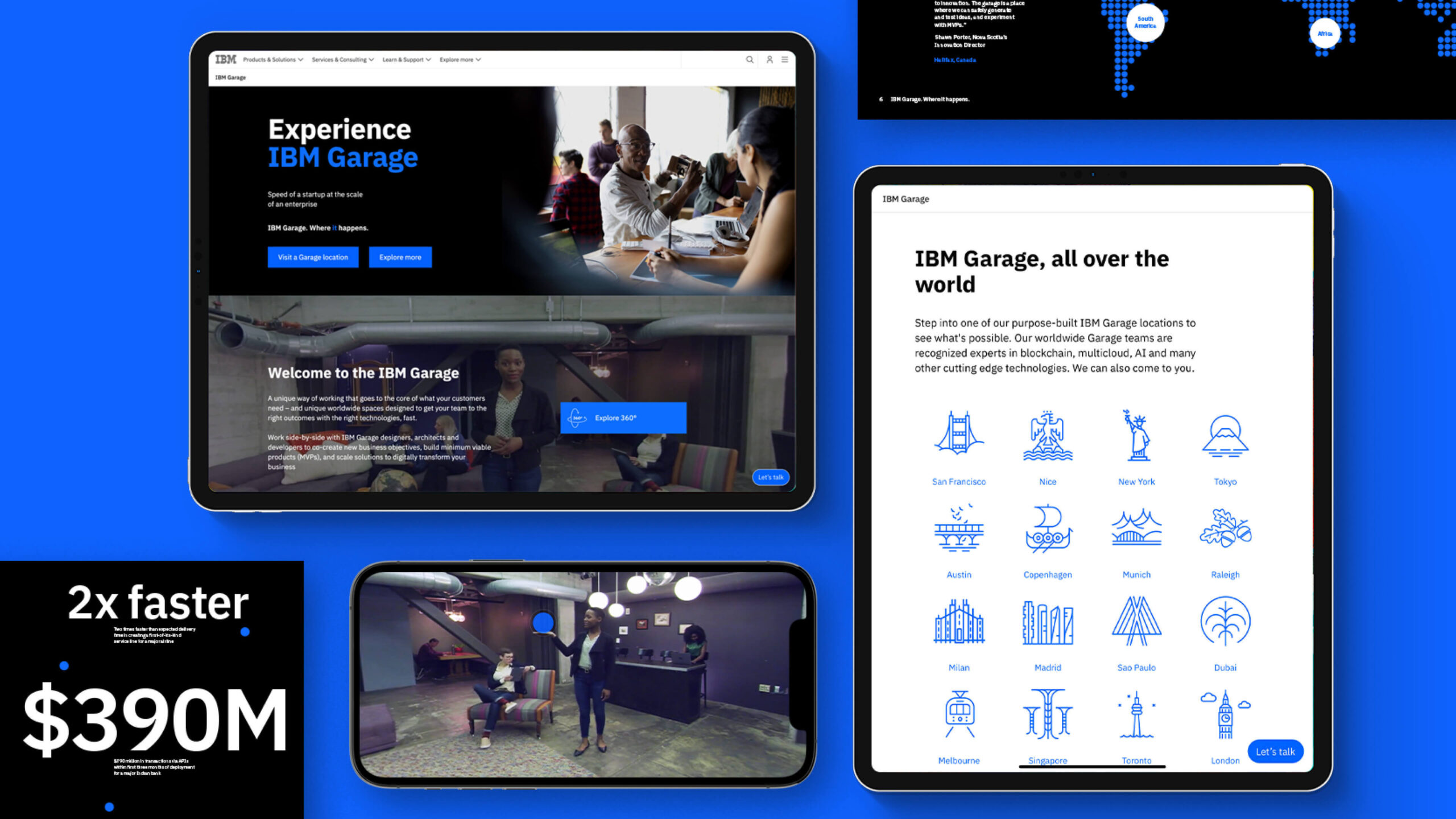 Businesses are people, too. But the focus in B2B is often sharper.

DA: But when it comes to emotions and engaging the audience on a deeper level, there are differences between B2B and B2C. B2B is often narrower and more focused: you’re talking to a specific audience and that might just be 100 people. The creative can be more nuanced.

There often needs to be empathy with the client’s client, too. The differentiator between a successful campaign and one that misses the mark is often the feeling that this company understands me and my challenge. To work out their clients’ needs and emotions, you need to invest in research.

RS: Exactly. You have to engage with the personas identified within your client’s audience and draw out the emotions they experience.

DA: One of the campaigns we’ve worked on for IBM was Wize Guys, where we used influencers to communicate with IBM’s audience. We found a lot of IBM’s target audience was heavily influenced by respected people in the industry. And you’re more likely to buy something from a person, rather than a faceless company. Look at Steve Jobs or Elon Musk. So, instead of focusing directly on IBM solutions, we made it more about respected industry people who advocated for those products. And it worked, with 7.1 million impressions and a reach of 3 million in just one month. 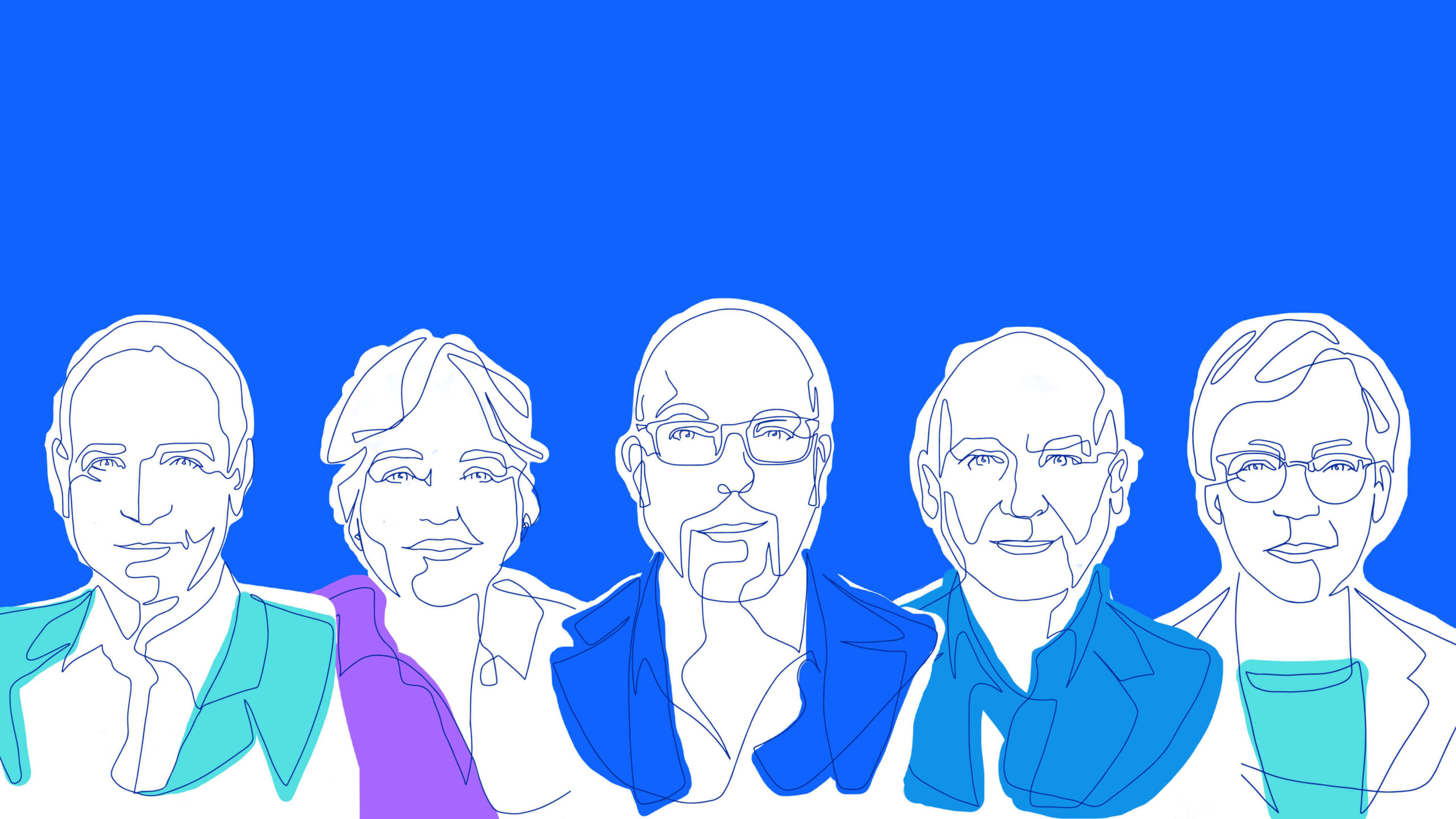 Designing With Emotion in Mind

Design is everything. From graphics, typography, messaging to visuals.

RS: Once we complete the research, we’ll workshop the idea and how best to communicate that visually and verbally. Design is everything, including your messaging: it’s the umbrella.

DA: Sometimes design needs to be stripped back to let the messaging sing. Our work on IBM’s Inclusion Week was simple and it was extremely powerful. Typography can almost be more emotional than something very visual.

RS: Yes, sometimes words and typography are enough. We worked on the branding for This Run for Tata Consultancy Services’ marathon sponsorship programme. The research uncovered that the heart of it was the human reasons people run and raise money, and we found that bold typography evoking these reasons was the most powerful approach.

But subtle connections can be achieved through visual cues, too. I’ve recently worked on a website for a company that speaks directly to developers and to get something that really resonates with that end audience on an emotional level, we’ve incorporated coding elements into the front-end design. It might not seem very emotive to you or me, but for a developer they will see this company is speaking their language and is on their wavelength. 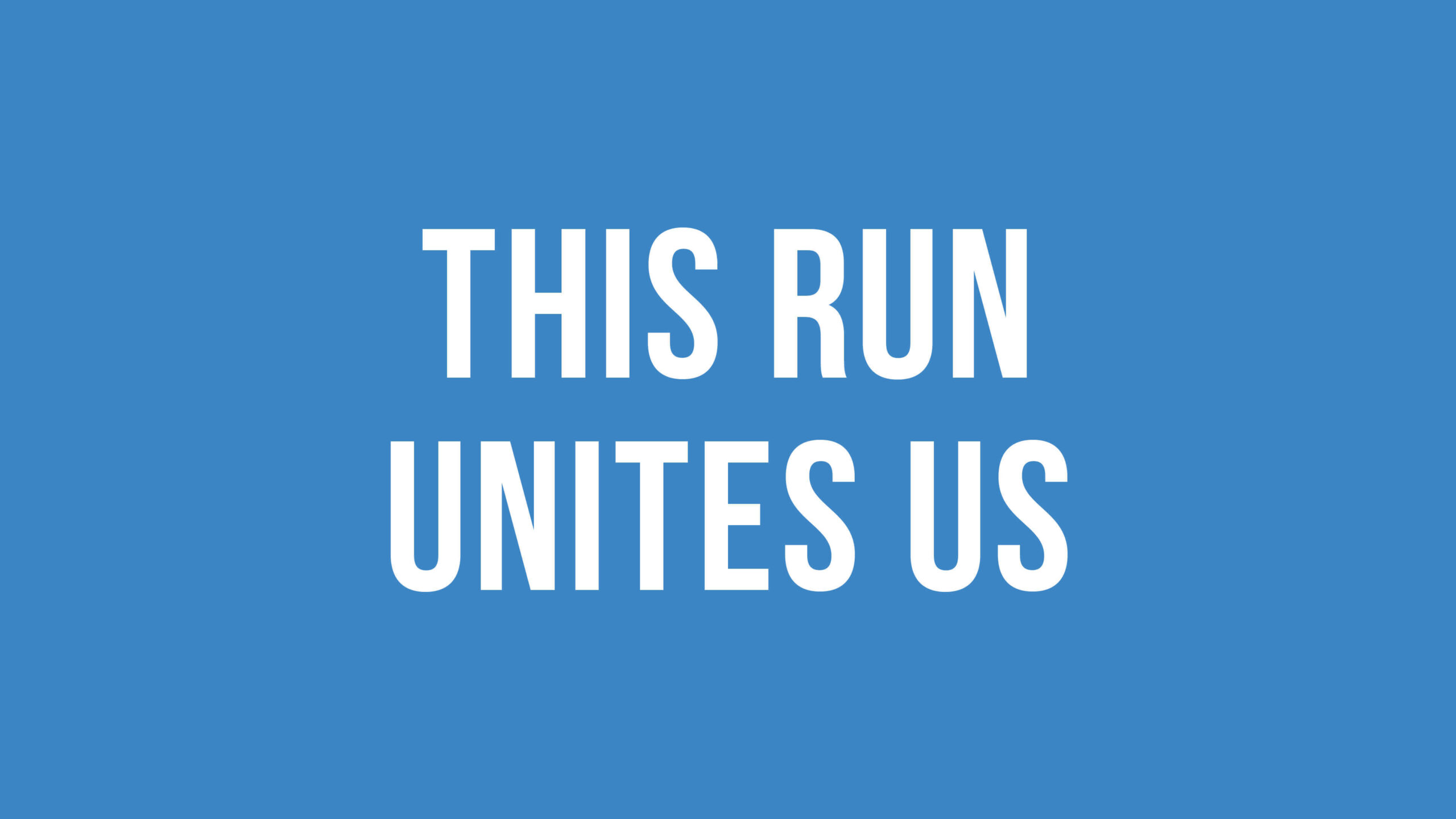 Once Upon a… Pitch

The pitch should be a story that stirs your client emotionally.

RS: The best way to pitch an emotive idea to the brand? Always demonstrate how it will impact the end user. We connect the dots for the client.

DA: When pitching the big idea, a tool we often use is the manifesto. It’s romanticised storytelling that’s meant to get you excited. Like the BBC’s build-up teasers for rugby coverage. The manifesto should make the hairs stand up on the back of your neck.

When we pitched our lonely dodo concept to the CMO of Durrell Wildlife Conservation Trust, which focuses on saving species from extinction, we were inspired by the harrowing video of the last Tasmanian tiger and how lonely it looked, realising that it’s easier to communicate loneliness than the idea of extinction. 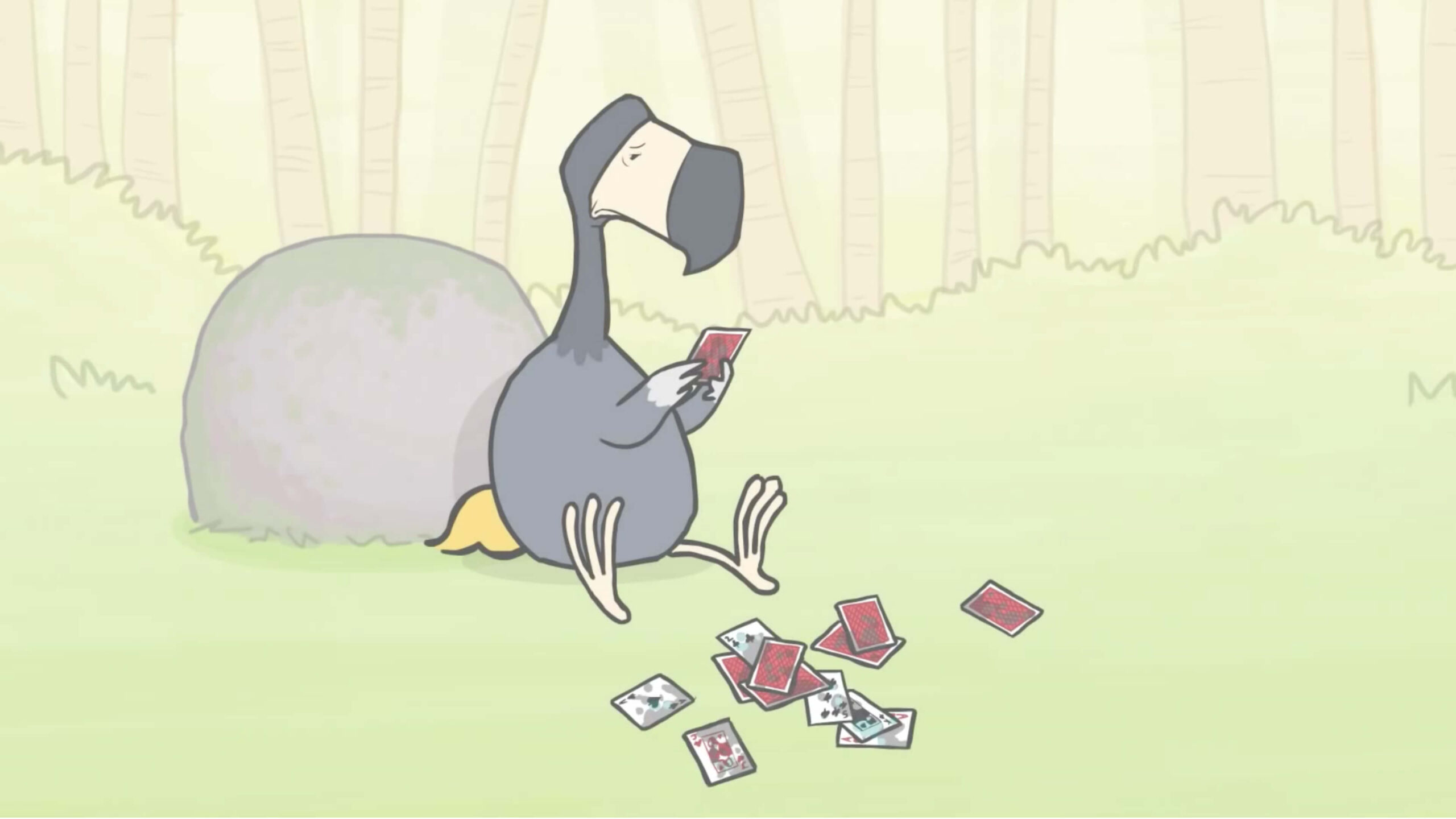 So, we pitched a bitter-sweet story about the last dodo on Earth who is looking for a mate and travels the world asking other animals if they’re a dodo. But gradually the dodo becomes more and more defeated and lonely. At the end there’s a little crack of sound in the wood — the hope of a mate — but you never see if it’s another dodo even though you know deep down, it can’t be.

The CMO cried. And that’s the power of storytelling.