By Gökçe Nur Oguz – CEO and Co-Founder of Playable Factory

The mobile games industry has a long and successful track record of driving innovation in advertising. But with the multiple soft and full game launches that are characteristic to the space, along with frequent, high intensity A/B testing and product updates, it prompts the question…

How does mobile gaming manage to pull it off?

Mobile advertisers are faced with an increasingly long list of factors which impact ROI, some of which include IDFA, the cookie-less landscape, and the need to adapt to multi-screen driven ecosystems.

Reaching Generation Z or ‘Zoomers’ is another challenge altogether. As per Kantar Millward Brown’s AdReaction: Engaging Gen X, Y and Z research, nearly 50% of Zoomers tend to avoid and block ads. This same demographic has a shorter attention span than previous generations and generally favours videos that are less than 10 seconds in length, as well as preferring ads that aim to engage and entertain them.

Following these trends, it’s easy to conclude advertisers have been dealt an unwinnable hand. But nothing could be further from the truth. By leveraging the potential of interactive ads, non-gaming brands will find that mobile advertising is an industry in which they can still find success.

Playable ad technology is the go-to source for driving app installs and revenue streams across the mobile gaming industry. It’s a proven ad unit that can increase return on investment, conversion, app installs and retention. In the last five years, playable ads have been used by mobile game developers to showcase their games and drive app installs.

Inspired by the runaway success and adoption of playable ads in mobile games, highly interactive ad formats are now making waves across all forms of content. They’re part of a growing trend of interactivity and engagement in advertising which has led brands such as Cheetos, Burger King and New Balance to create their own custom experiences.

Brands are yet to get playable

Non-gaming apps tend to use a mix of full screen interstitials, banner ads,  and occasionally, rewarded video ads. Yet, despite the unprecedented success of playable ads in gaming apps, and the trails blazed by brands such as those above, non-gaming apps have yet to fully embrace the technology. 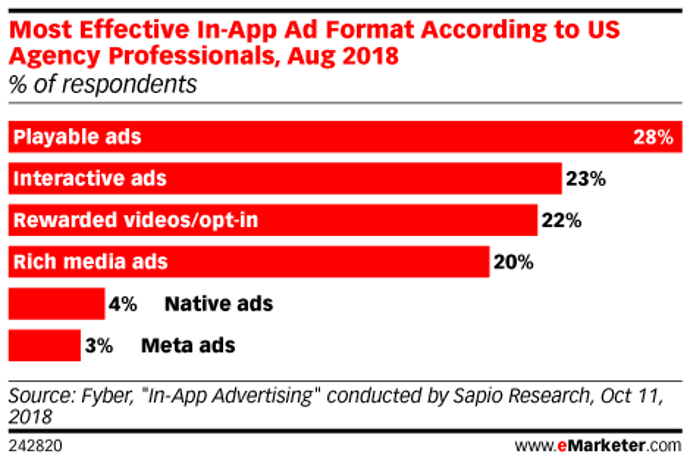 There are many factors at play, but the differences in media buying processes is one primary reason for the delayed adoption of playable ads. So there’s a pervasive lack of familiarity among in-house marketers and agencies with the technologies and companies that specialize in these interactive ads.

On a global scale, an increasing number of brands are making playable and interactive ads part of their strategy. But for every one that makes the leap, hundreds more choose to watch from the sidelines. Many of the latter brands chalk up their reservations to scalability concerns, fears about ad quality, or simply being unaware of the technical nuts-and-bolts that fuel the ad format.

In truth, each of these cited reasons is as valid as the last. Or was. But the technology on which interactive ads run is a far cry from the early days of playable ads, to the extent that it’s now powerfully simple to run an interactive campaign. With this in mind, it makes sense to infer that the biggest reason for brands’ fence-sitting is one as old as humanity itself. The fear of the unknown. But as technology continues to evolve advertising along with the rest of the world, brands may soon witness their fear turn into something even less profitable. FOMO.

In the past, the biggest barriers-to-entry to interactive ads were the extensive coding skills and time frames needed to create them. However, the last five years have seen unprecedented innovation in the marketplace for interactive ad production. With tools like Playable Factory’s Gearbox, brands and agencies are handed a simple, fast, and no-code way of creating interactive ads on a silver platter.

While the clicks garnered on traditional ads are an effective metric, playables have been found to record far higher engagement and action rates. Not only that, as we enter an era of digital privacy, softer metrics like attention and brand uplift will be gaining more traction. And as it stands, there are no better tools to measure these difficult metrics than playable ads.

Despite claims that suggest the contrary, playable and interactive ads are very much scalable.

Typically, there are various templates for interactive ads which make their creation lean and timely. For example, one proven method entails the advertising platform creating a modular approach which can be used by brands or advertisers to create an unlimited number of playable ad variations for use across different platforms and audiences.

This method is far more cost-effective than paying an agency to manually create multiple variations of the same ad, which oftentimes cannot be monitored individually. On the other hand, playable ad tech ensures that each ad variation, no matter how minute the changes between them, has their performance keenly measured.

The future of advertising is undoubtedly immersive, with soft metrics to complement the hard and fast ones we’re all familiar with. As more consumers become unresponsive to the old formats of advertising, playable and interactive ads are becoming a vital part of the media mix. Not just for gaming but for fashion, auto, and all brands across all verticals.

How Can Brands Use Black Friday as Part of Their Marketing Strategy?

You, Me and Privacy: Here’s What Brand Marketers Can Learn from Regulated Industries Like Crypto and Healthcare

The Secret Weapon of Retail Media: Why Creative Matters More Than Ever