If the past six years of American politics have revealed anything, it’s that the old ways in which political campaigns understood and connected with persuadable voters no longer apply. Going into 2022’s red-hot election cycle, campaigns need access to relevant, real-time voter intelligence to build and execute campaigns that win the hearts and minds of the fast-evolving U.S. constituent.

Today’s news cycles, which move faster every year, dictate how people form opinions, and traditional polling mechanisms long ago lost the ability to keep up. Today, successful campaigns need a more fluid understanding of the topics that are influencing voters—and in what way. Let’s take a deeper dive into how we’ve seen real-time news cycles influence the political landscape in ways campaigns didn’t anticipate—and what campaign leaders can do to ensure they’re not blind-sided going forward.

The 2016 Surprise We Should Have Seen Coming

Trump’s surprise victory over Clinton in the 2016 U.S. Presidential Election has now gone down in history among the all-time “how did we not see that coming?” moments in political forecasting and campaigning. But indeed, campaign leaders (and the world) just weren’t looking in the right place.

Going into the 2016 election, campaigns underestimated the sentiments of large swaths of so-called “blue-collar voters,” and they failed to pay attention to the news stories that were truly influencing those voters.

The below graph, based on data from the AI-driven Resonate Ignite intelligence platform, provides a snapshot of how blue-collar voters in key states were engaging with two important news stories leading up to the 2016 election: the Hilary Clinton email server scandal and Trump’s Access Hollywood tape. Looking at this data, we observe that the email server story was one that blue-collar voters were tracking and engaging with heavily for more than three months leading up to the election, whereas the Access Hollywood interview represented a temporary blip in consciousness. In failing to give appropriate weight and response to the former issue, while assuming the latter represented a death blow to the Trump campaign, the Clinton campaign made a critical miscalculation. 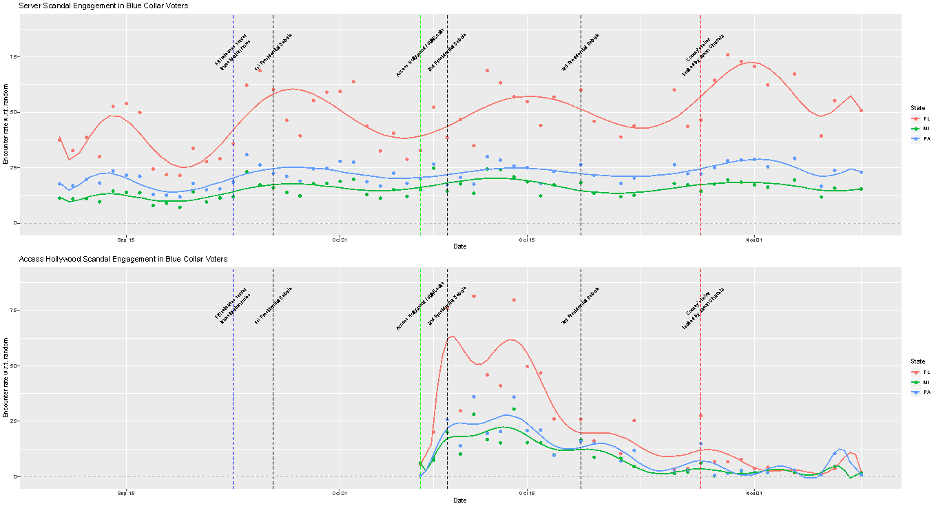 Now, six years later, there’s no less at stake in terms of election outcomes. In 2022, each turn of the news cycle seems to bring with it campaign-shifting evolution in voter sentiment. From the war in Ukraine to COVID to social injustice protests, the landscape is changing rapidly.

So how can campaign leaders know which news cycles are most consequential for their causes? The process requires a sophisticated technology infrastructure and thoughtful AI and ML applications. Leveraging such tools, the first step is to gain a more-nuanced view of voter segments.

Beyond the Two Parties: A More Granular Approach

American voters are a diverse electorate—ever so much more complex than a two-party system would suggest. For political marketers, the first step in better understanding voters’ personal drivers, values and issues is to get more granular with segmentation. Resonate recently released a comprehensive analysis of the sentiment, intent, motivations and values of the American voters who will determine the results of the 2022 elections. This research uncovered 10 unique voter segments that candidates must understand as they plan their primary campaigns. They are:

With a more-nuanced view of the electorate, campaigns can begin to understand how the fast-moving news cycle influences these groups—and how important that influence is likely to be.

Campaigns can’t afford to discount how important it will be to decipher, in real-time, how news is influencing the most important segments leading into midterm elections. So what does that look like?

Again, this is where the power of technology and AI comes in. Consider the below graph, which provides a snapshot of how six of the most important above voter segments are engaging with the topic of war crimes in Ukraine. While this topic has been getting no shortage of press coverage, interest in it has quickly waxed and waned. Furthermore, only Democrats seem to be closely tracking the issue, with independents being the least interested among segments. As such, this doesn’t seem to be a topic around which crucial votes will be decided. 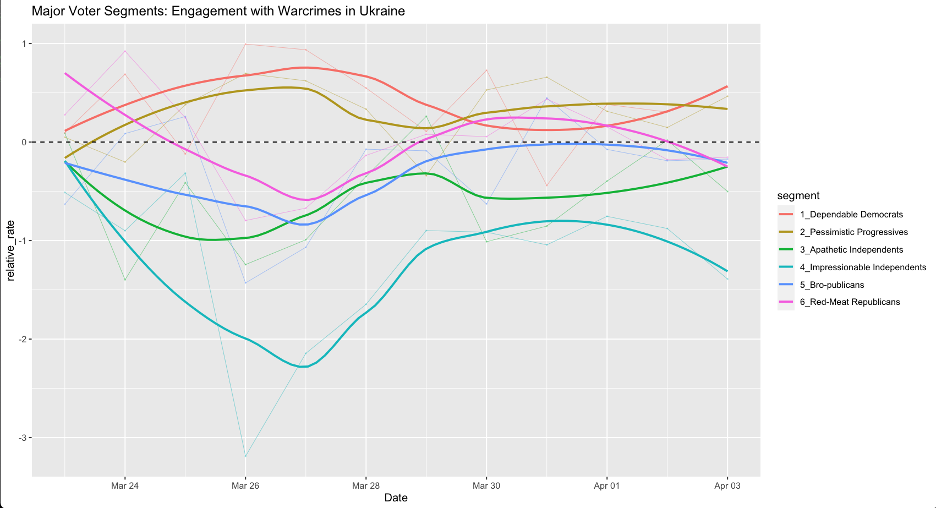 Let’s contrast that with the topic of the Biden administration and inflation. This is a topic that has been receiving disproportionate and sustained attention from the Red-Meat Republican segment and is likely to be a vital issue around which votes are cast—and voters are influenced. This data suggests that candidates would be remiss to downplay the importance of speaking strategically and forcefully around this topic in the lead-up to the election. 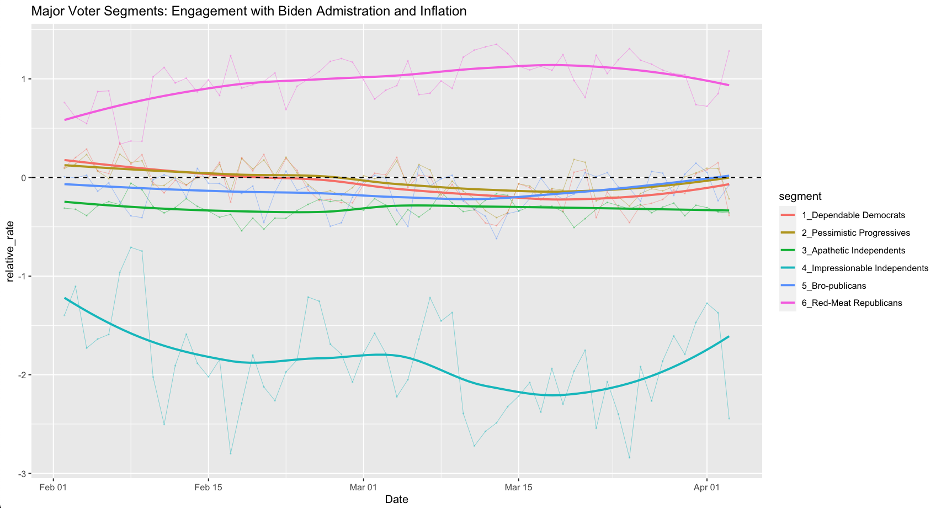 Of course, these are just two simple examples of how differently voter segments tend to react to and track major news cycles going into elections, but they illustrate just how sticky certain subjects can be among certain voter segments—and just how quickly others can be dismissed.

If a campaign’s tactics and messaging aren’t adapting to voter reactions to real-time shifts in the macro environment around them, they very well might end up as the next case study in “how did we not see this coming?”