Media consumption changes have attracted a lot of interest recently. We’ve long known about the explosive rise of time spent on mobile devices, and we all recognize that digital entertainment formats continue to become more prominent within the consumer’s life – with time spent on podcasts, music streaming and TV streaming all posting year-on-year growth.

Consumers are devoting their time to an ever-more diverse portfolio of devices and formats, so it can be tempting to assume that traditional formats must have lost some of their shine; mass digitization during the pandemic has only fueled these assumptions.

Now that eyeballs are spread across more screens and more places, how could longer-established formats continue to command the same level of attention? And by extension, how could the ads they carry still wield the same efficacy?

It’s a logical theory, but what does the data say?

Linear/broadcast TV has certainly been under pressure, with a gentle downward trend in the amount of time spent on it daily; the average global consumer now watches just under 2 hours per day, a decline of about 25 minutes compared to the early 2010s.

While a traditional TV set remains the top choice (64%), just over half of consumers globally are using alternative devices – with a mobile (33%), PC/laptop (25%) and then tablet (11%) being the most popular.

Meanwhile, a quarter of global broadcast TV users are not watching via a television set at any point in a typical month, a trend which increases in line with age to be twice as common among 16-24s as 55-64s. In turn, the notion of households sitting in front of their television for the evening has been challenged.

Broadcast TV still accounts for more time than any other entertainment behavior.

It also continues to post very high figures in some key demographics and parts of the world, particularly from an advertising perspective.

Consumers in the US. spend more time watching television each day than their counterparts in any of the other 46 countries tracked by GWI – nearly three hours daily – putting it considerably ahead of time spent on social media in the US. .

It’s reflective of broadcast TV maintaining a stronghold in North America and much of Western Europe.

By age, the ongoing power of linear TV among older groups is plain to see. Boomers still watch almost three hours of broadcast TV daily, three times the figure they spend on streaming.

Even among Gen Z – often seen as the trendsetters of media consumption behaviors – both formats capture equal amounts of time, at around 1.5 hours daily.

Rather, consumers have a more diverse entertainment portfolio and this is driving increases in the overall time spent on media consumption.

The evolution of the formats and devices we engage with has opened up more times and opportunities across the day – but broadcast TV remains a fundamental part of our behaviors.

TV ads are the most favored

Interestingly, consumers have different tolerance levels for ads in various locations. Research shows that consumers in the US and UK feel that TV ads are less excessive than those found online and much less intrusive.

In fact, when both positive and negative adjectives are combined into a composite score, we start to understand just how much more favorably TV ads are viewed compared to other ad formats.

This is a trend that transcends demographics. 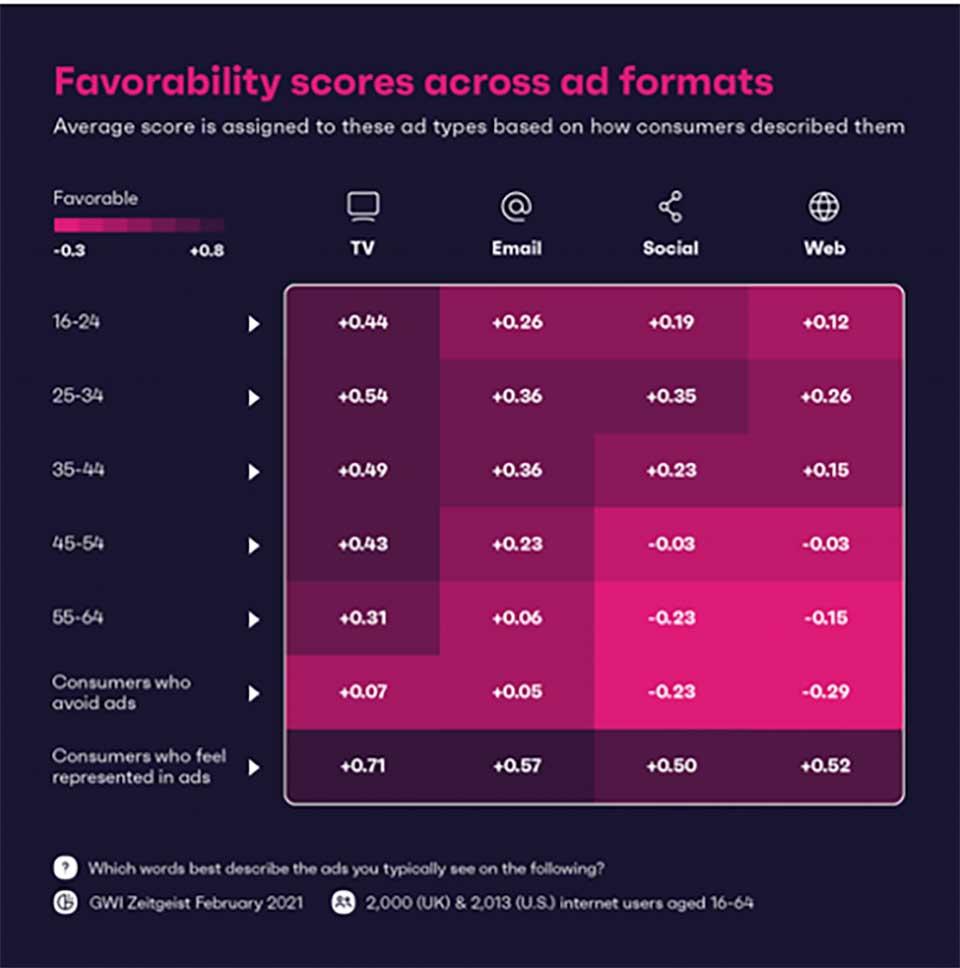 By age, for example, TV ads are top for all groups but it’s among older segments where they establish the strongest positive differentiator vs other ad formats (and remember, this demographic are the heaviest engagers).

It’s a similar story among other audiences.

Whoever your target audience is, they are likely to approach TV ads with greater relative positivity. 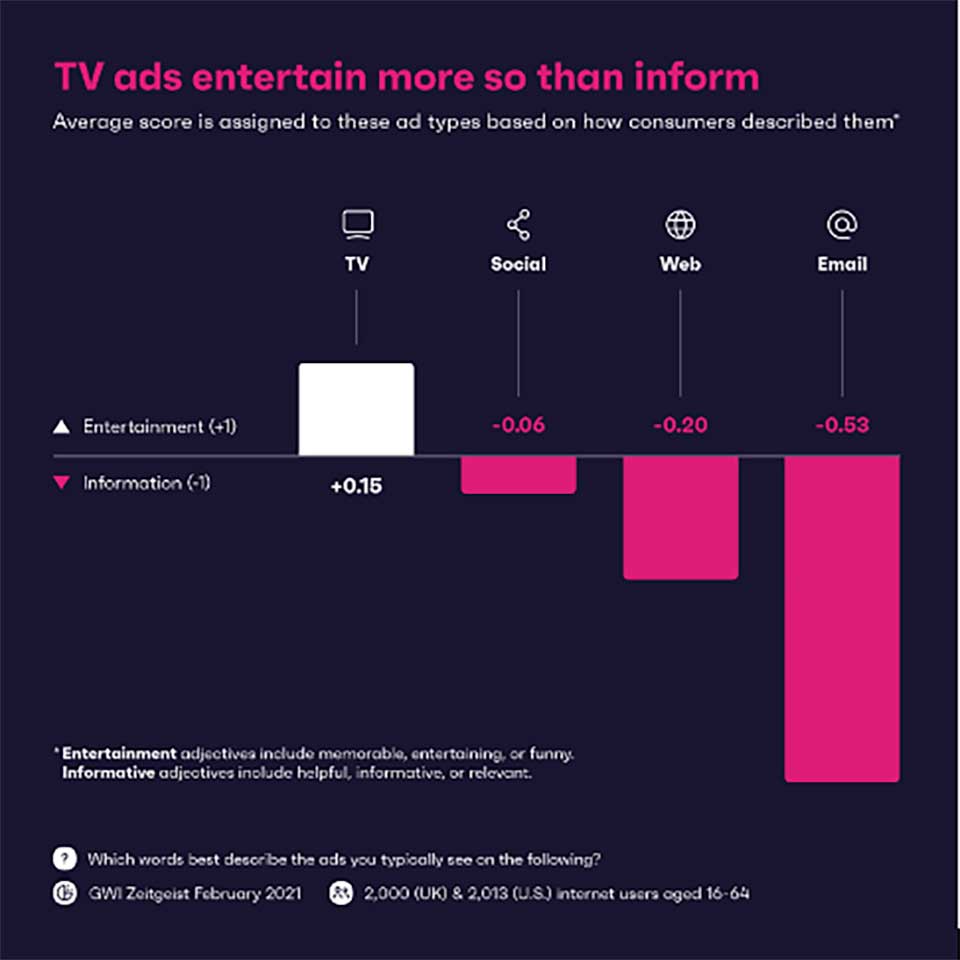 One way of exploring this is to dig deeper into the positive scores to see how they differ between ad formats.

When we do this, a plain distinction emerges: TV ads are appealing because they have the ability to entertain, whereas the other formats tend to be seen as beneficial when they provide relevant information.

We need to put this in context.

The average person doesn’t spend their time looking for ads that catch their eye. Ads are something we live with, and we’re exposed to them throughout the day in many environments. Sometimes, they make a connection or a positive impression.

In their ability to entertain, TV ads have gained a level of acceptance that stands far above that of other formats, even among people who are actively avoiding any type of advertising.

The lower positivity scores for other formats and the need for them to be informative to make a positive impression tells us a lot.

It tells us that while the other formats are still indispensable in any ad campaign, compared to TV their effectiveness is much more reliant on how strategically they’re used in the buyer’s journey.

Information needs will change at different stages of the journey, and seeing as irrelevant content is the third-leading cause of negative brand impressions caused by ads, the stakes are likely to be higher for these formats.

It also tells us that other formats can’t take the place of TV as the workhorse in brand building and that while many advertisers might be hopeful for greater personalization – even in more traditional mediums – this isn’t necessarily what people are crying out for in regards to TV ads.