As China gears up for hosting the 2022 Winter Olympic games organizers are undoubtedly feeling a mix of excitement and anxiety. It’s been a tough ride, with the nation going to great lengths to keep the country COVID-19 free but the Games are set to begin on Friday, February 4, 2022.

Using a mixture of our Zeitgeist and GWI Sports data sets, we bring to you four powerful insights you should know about the event.

1. Appetite for the Winter Olympics is Bigger than You Might Expect

Out of the 186 sporting events in our sports data set, the Winter Olympics earn the silver for interest, beaten only by the summer equivalent.

Despite difficulties with Covid and some countries choosing to boycott the event, nearly 2 in 3 people are in support of having the Beijing Winter Olympics take place this year and a further 57% are feeling excited about the Games, even though tickets will not be sold to the general public.

Interest among the older generations is high, with 56% of baby boomers being interested in the Winter Olympics, however interest drops off among younger people and is lowest among Gen Z.

The debut of skateboarding, surfing and sports climbing at the Tokyo Games in 2021 was a deliberate tactic to win over younger audiences. And similar moves will be needed to entice them when the Winter event rolls around.

2. Extreme Sports Will Secure the Viewers of the Future.

Among all the events in the Winter Olympics, figure skating comes out on top with around a third interested in the sport. 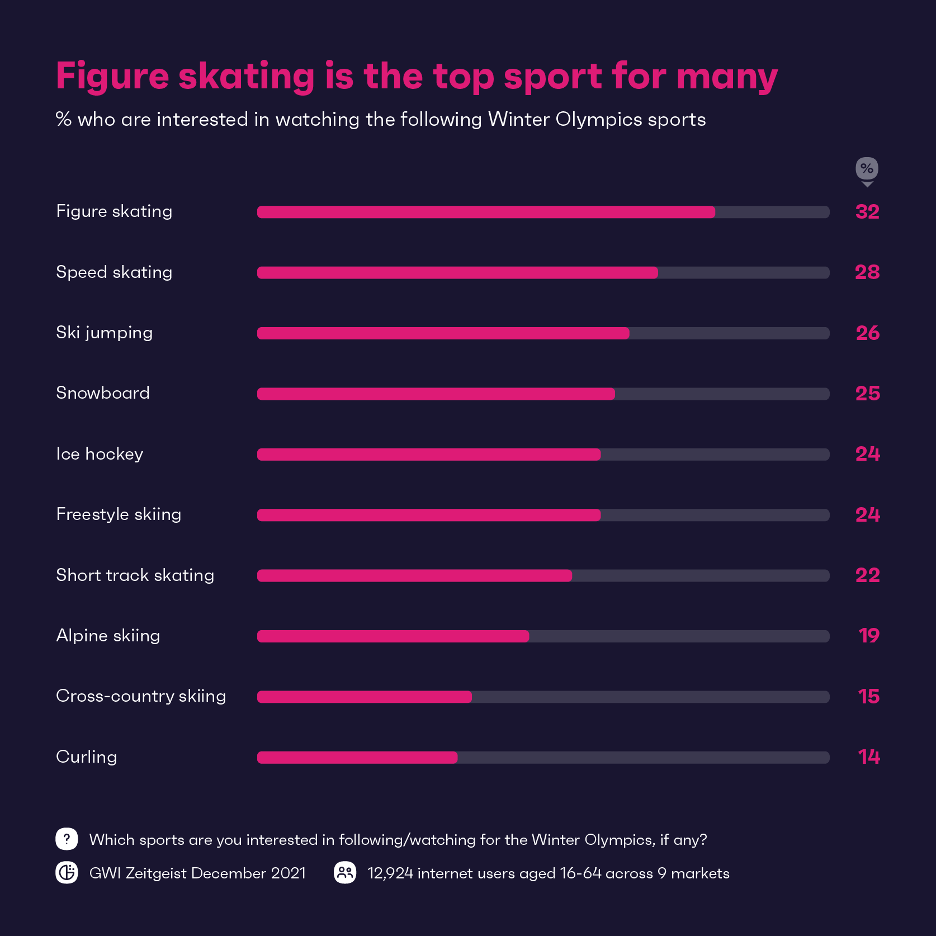 Some of the buzz among the younger generations around snowboarding could be due to Olympic gold medalist Chloe Kim, who won gold in the 2018 Winter Olympics. Kim has also used her platform to show her support for climate activism, an important topic for many Gen Zs and millennials.

Younger audiences see less of a distinction between the two events and taking them more seriously will help events like the Winter Olympics grow.

3. The Winter Olympics Should Help Women’s Sports Continue to Evolve

Organizers and fans alike want to champion women’s sport. For the summer Olympics in Tokyo, the International Olympics Committee issued guidelines encouraging the gender-equal, fair, and inclusive coverage of the Games.

In a similar vein, this year’s Winter Olympics break a record with having 46% of athletes being women, as well as hosting the monobob competition — an individual event that is exclusive to females.

Winter Olympics fans in particular are very supportive of inclusive sport and would like to see more investment and exposure of women’s sport in the media.

These views have also increased significantly since Q4 2020, with the number of Winter Olympics fans who follow female athletes or teams on social media increasing by 15%. 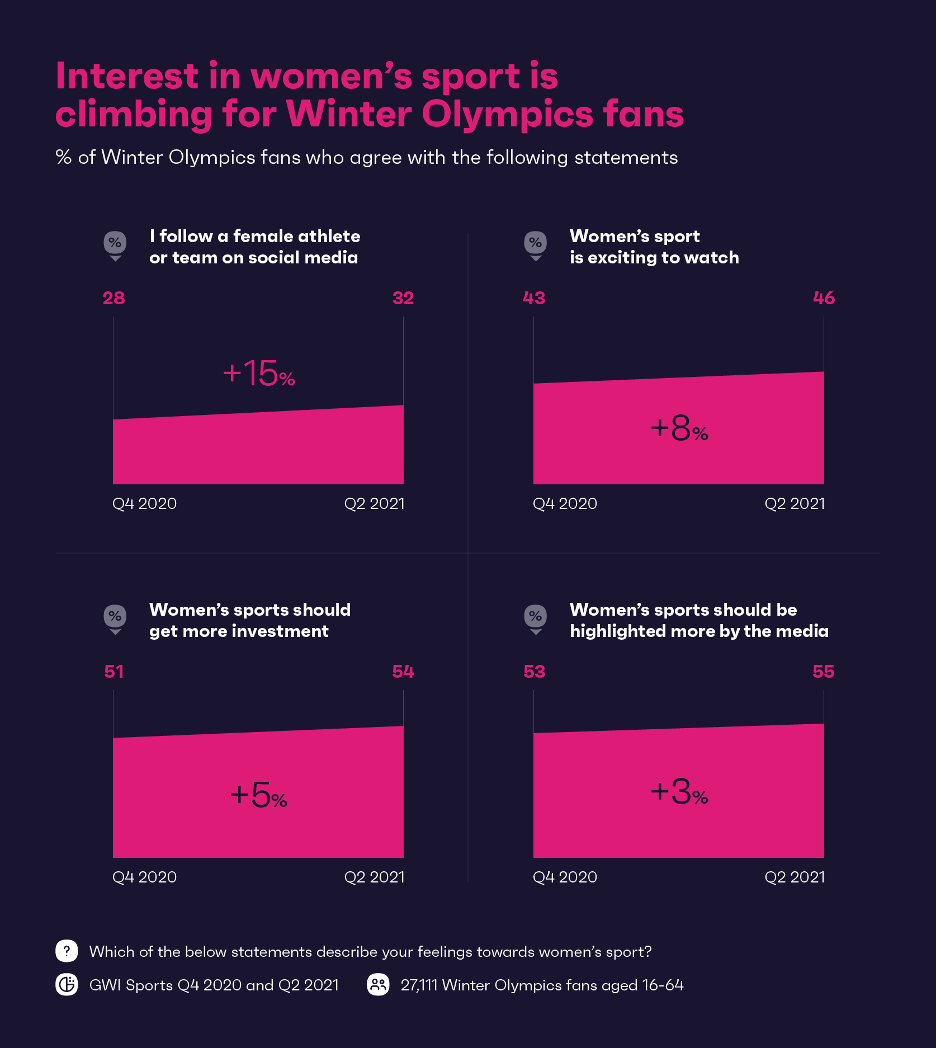 This is part of a wider trend we’ve noticed of how attitudes towards women’s sport are changing. Our GWI Sports data shows that the number following women’s leagues has grown, for example, the number supporting the FA Women’s Super League (WSL) has increased by an impressive 30%.

Having a gender balance in mind, the Winter Olympics has made all the right moves.

Inclusive events like the Winter Olympics should help this trend become more of a habit for viewers as they will build audience connections with leading female teams and athletes.

4. Live TV is King but the Highlights are Important

The number who plan to follow the Winter Olympics through athletes and network accounts on social media is down 56% and 42% respectively compared to the Summer Olympics last year. 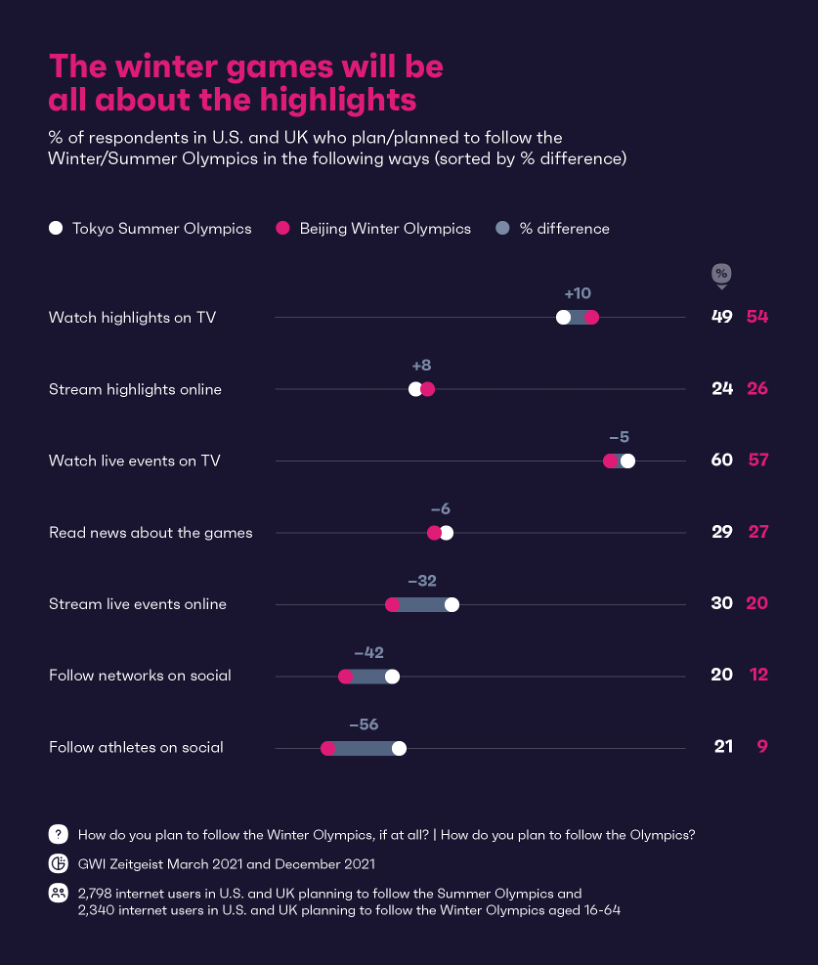 While live TV is the top way followers will tune-in to the Winter Games, fewer will be watching the live events compared to the Summer Olympics.

But we find that more followers will be catching up via TV and online highlights than during the Summer Games, making the Winter Olympics more about catch-up viewing than live viewing.

Highlights will also be particularly important to those who will not be able to catch the live events due to being in different time zones.

Publishers should therefore ensure they are putting an extra focus on their catch up packages and get the word out there, as these are tipped to be popular among viewers globally.

For example, American streaming service Peacock is offering “the ultimate fan experience, all in one place”, including exclusive daily shows, channels, and documentaries — as well as gold medal moments. Packages like this are likely to appeal to fans, allowing them to get all their Winter Olympic content in one place.

Our Big Insights in a Nutshell:

Recognizing the Power of Product Placement to Drive Connection Through Inclusivity